“I can’t change the direction of the wind, but I can adjust my sails to always reach my destination.” ~ Jimmy Dean 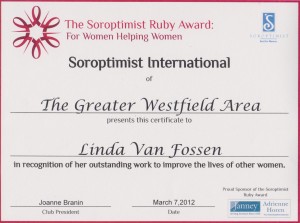 The articles below were written by Executive Director Linda Van Fossen.

The Bystander Effect.
Kitty Genovese 140 times.  The victims were children, many with special needs.  Similarities to the tragedy in NJ in 2004, when 3 young boys were being starved and eating plaster to survive, are chilling.  Again, neighbors now report seeing children foraging in garbage for food, standing at the end of the driveway in cold weather.  One victim filed a complaint in 1998.  The foster placements by St. Christopher Otillie and the NYC Administration for Children Services in the home of Gonzales-Mugaburu did not stop.  read more>>

“Mad About” the New Moto Jeans
“We’re mad about” the insensitivity of Bloomingdale’s and the blatant disregard for millions of young Americans who struggle with eating disorders.  Of those who suffer, 90% are adolescents and young women; 20% actually die from the disorder.  To many young women, the emaciated waif in the ad for Moto jeans represents a cultural standard for beauty, which they believe they are unable to achieve.  The androgynous look of the model is in stark contrast to the over-sexualized copy and setting.   read more>>    view ad>>

Shades of Grey
I admit it. I am an almost 70 year old widow. The only “shades of gray” I am concerned about are in my hair. However, my memory is still intact. I clearly remember sex; we used to call it making love. That’s certainly what we called it on Valentine’s Day. Even those of us with gray hair still recall sex as being fun, playful, frisky, affectionate, and consensual; some of us are even still doing it. Sex was not dark, did not hurt, and was not scary; except when we were dumb and forgot birth control.  read article >>

Speak Out Until the Children are Safe
Their defense attorneys described it as “alternative and creative” discipline. Closing a frail, vulnerable child in a dark, cold, damp cellar to calm him down is certainly a diversion from any parenting techniques I ever encountered. Hardened criminals in a prison are protected from such egregious punishment. Small children frequently are afraid of the dark – imagining monsters under their beds. read article >>

Starving Boy – McDonalds
He begged for a Big Mac—or, maybe, a Happy Meal—even a donut. “She declined,” according to the Star Ledger. When he found a half of an old dirty cookie in her glove compartment and swallowed it, she agreed not to tell Miss Vanessa, his foster mother.
An emaciated child was afraid and hungry. He implored a “safe” adult to feed him. “ She declined.” Then this DYFS worker documented his hunger, her refusal, his fear. That is not a system failure; that is a person failure. read article >>

Adolescent Boys
Adolescent boys are very much like puppies– scrappy, roll-around-on-the-floor puppies. While watching a team of boys following a sporting event knock each other over, hug/wrestle on the ground in piles, and give each other head “nugies”, I became convinced of their similarity to a litter of puppies. This is not a disparaging analogy; in fact, adolescent boys are quite lovable. Their unfortunate reputation which suggests the opposite is mistaken. Recently, a national news magazine published a cover story in defense of teenage girls. Now, I want to defend our much maligned boys. read article >>

DYFS
The large sad eyes of seven year old Faheem Williams from the front page of the New York Post still haunts me. Lost innocence – such unspeakable tragedy – how does this happen in America, in New Jersey? read article >>

Sniper
On the front page of several New York newspapers, the blond, beautiful and rich Lizzie Grubman shared space with two African American men, the alleged Beltway snipers. I couldn’t help noticing the obvious dichotomy, yet the more subtle, sinister similarity – an apparent total disregard for the lives of others and the resulting injury or death to their victims. read article >>